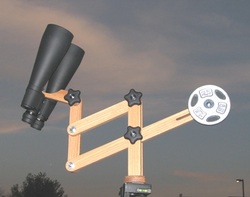 The LW Standard Mount allows easy adjustment of the binocular height, both for sharing the binoculars with others and for maintaining the same eyepiece elevation relative to ground when viewing objects at different altitudes. Terry Alford, an East Tennessee master craftsman, makes each LW Standard Mount.

The LW (Light Weight) Standard is suitable for binoculars up to about 3-1/4 pounds.

The counterweight attaches to the lower arm of the LW Standard Mount and slides in a slot to compensate for the weight of the binocular. Lighter binos require the counterweight moved towards the binos, and heavier binos require the counteweight moved away from the binos. For larger, heavier binos, one 5 pound can be used, or two 2.5 pound weights can be used with one weight on each side of the lower arm. A 3 inch by 1/4 inch carriage bolt is required if two weights are used, and the bolt is readily available at any hardware store. The opening in the weight can be filled with 1 inch flat washers (about 6 to 8 are needed, depending up the thickness.

Also available as a Kit.